23-year-old Kapamilya star Ivana Alawi is known as one of the most popular YouTuber in the country today, she is also a fast-rising celebrity as she is now set to star in her first lead role in the upcoming series, “Ang Lihim Ni Ligaya.” While this young star was known by her fans and followers as a super jolly and happy person, it was recently revealed in an interview that she also experienced some challenges before she was given the chance to join show business. Ivana whose real name is Mariam Al-Alawi is of Moroccan and Filipino descent, she grew up in Bahrain with her father Samier Al-Alawi and two older siblings. She also has a 15-year-old sister, Mona Louise Rey, a former child star from the GMA network. Unfortunately, their parents separated when they were young, that’s why her mother, who at the time was still pregnant with Mona decided to go back to the Philippines. Eventually, she also joined her mother and other siblings to live here. During her TV guest appearance on the ABS-CBN morning talk show “Magandang Buhay,” last Monday, March 9, the actress opened up about her family, particularly on how her mother, Fatima Marbella, supported her dream to become an actress. Ivana also tried her luck by joining ABS-CBN reality show Pinoy Big Brother, as well as in GMA-7 reality show StarStruck in 2015, but both failed during auditions. 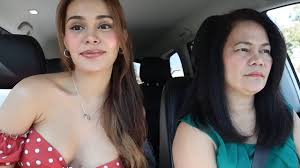 She was already 21 years old when she was given “extra” roles on TV, but despite the small role, her mom was always there to show her full support, Ivana then recalled: The beautiful actress also shared her experience while growing up in Bahrain, the country where their family used to live. According to her, there are a few people who judge them because they have a Filipina mother. It even reached a point when one of her schoolmates initially thought that her mother is their family’s helper.

She recalled that the said schoolmate asked her, “Is that your helper?” to which she responded immediately, “No! That’s my mom.”