Before his retirement, Onyok became one of the most famous Filipino boxers and also became known for being a comedian in the entertainment industry.

During his boxing career, he won a gold medal at the 1994 Asian Games and a silver at the 1996 Summer Olympics, the country’s only medal received in those Games. For his showbiz stints, he appeared in several ABS-CBN sitcoms. He also became part of Manny Pacquiao’s Show Me Da Manny on GMA 7, and in TV5’s defunct comedy-drama Beki Boxer. 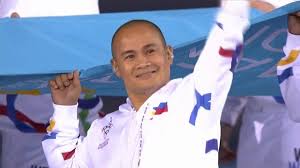 When it comes to his family life, Onyok married May Balisi-Velasco and the couple was blessed with four children. One of them is currently making waves online because of her beauty and similarity to Kapamilya Teen Queen Kathryn Bernardo. Onyok’s 21-year-old daughter Angel “Ry” Velasco has already established her own name in the world of social media. She is a famous social media influencer and a beauty vlogger, with over 250k subscribers on her YouTube channel and 181k followers on Instagram. It was in March last year when Ry graduated at the De La Salle-College of Saint Benilde, where she took up the course of Export Management.

She first caught the attention of the netizens when she made a guest appearance on the morning talk show ‘Magandang Buhay” together with her retired boxer father. During the show, Ry described Onyok as a very kind and supportive father who always supports his children in all the competitions that they will join, whether if it’s a small or a big competition. Browsing more of her social media accounts, it is also quite noticeable that she is really close with her father and even supports her in doing some of her videos.

The young lady also revealed that since she is a daughter of a former boxing champ, she and her other siblings went through several boxing exercises and training because their father wanted to make sure that all of his children can defend themselves in times of need.