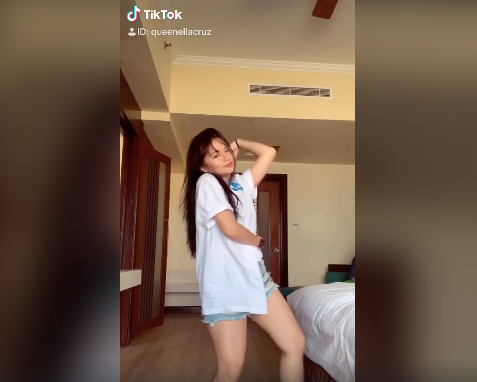 Last January 2, at exactly 3:32 in the afternoon, Ella released a video of her version of the Popstar Princess Sarah Geronimo’s four-year-old hit song “Tala.”

She recorded this almost 1-minute dance cover through the video-sharing platform “TikTok,” and later shared it on her Facebook account.

It can be seen in the video that the beautiful “Millenial Dance Princess” is only wearing a loose white polo top that she paired with tattered denim shorts as she dances to the groove of Sarah Geronimos’ hit song.


The song, Tala, and its accompanying dance steps have turned into a national obsession and many netizens and famous personalities already made their version of this dance craze. Originally, the song was released more than 4 years ago, but it was kept alive for the past years until recently when it gained much wider popularity in the country.

Many celebrities such as Kapamilya actresses, Loisa Andalio, Maris Racal, and Sue Ramirez already take on the “Tala” dance challenge. Another hit cover was from the former SexBomb dancer Izzy Trazona who performed with her son Sebastian Dewey, and even the celebrity couple like Maine Mendoza and her boyfriend, actor Arjo Atayde posted their own “Tala” cover on their respective social media accounts.

However, it appears that this beautiful young actress-dancer is leading the pack of other famous personalities by garnering over 11 million views on her dance cover, as of this writing. On Sunday, January 5, Ella once again showcased her trending moves as she performed the same song-and-dance number alongside stars Loisa Andalio, Sue Ramirez and Vivoree Esclito in the longest-running Sunday musical-variety show, ASAP Natin ‘To “Grand Tala Day,” which is led by the Popstar Princess Sarah Geronimo herself.