The handsome son of the late action star Rudy Fernandez and actress-politician Alma Moreno, actor Mark Anthony Fernandez was undeniably one of the most sought-after leading man and well-loved heartthrobs of his generation. During the peak of his career in the ’90s and even until now, many Pinoy viewers admired him for his acting talent and charm that he inherited from his celebrity parents.

Mark Anthony Fernandez first rose to prominence when became a member of one of the famous showbiz teen group in the past, “Gwapings” together with Jomari Yllana, Eric Fructuoso and later with Jao Mapa. While many believe that having celebrity parents is an advantage for his part, the young actor has proven his skills and created his own mark in the entertainment industry. Here are some of his unforgettable stints in the movies and teleseryes he starred in, such as “Palibhasa Lalake” (1991), “Pare Ko” (1994), “Mangarap Ka” (1995), and “Matimbang Pa Sa Dugo” (1995).


In 2006, the actor married Melissa Garcia, but they got separated after several years. They have two kids named Grae Cameron and Rudolf Venedictos.

The ex-couple’s firstborn son Grae Cameron Garcia Fernandez or better known as Grae Fernandez, the equally-charming and good-looking teen already followed the footsteps of his father in showbiz. The 18-year-old Kapamilya actor has been in the entertainment industry for almost 5 years now. 
Aside from acting, the handsome son of Mark Anthony is also into the music industry. He is one of the members of an all-male pop music group named “Gimme 5”, which also includes teen stars Nash Aguas, Joaquin Reyes, Brace Arquiza, and John Bermundo. Their group won the “Most Promising Recording/Performing Group” in the 46th GMMSF Box-Office in 2015. The father and son both appeared in the primetime action drama series “FPJ’s Ang Probinsyano,” where Mark Anthony played the role of Brandon, the prodigal and equally-vicious son of President Lucas Cabrera (Edu Manzano). 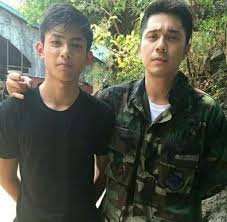 Grae, on the other hand was one of the guest cast who appeared in 2016, he portrayed the teenage version of Paulo Avelino’s character, the cunning and pretentious Eric “Erwin” Maniego.