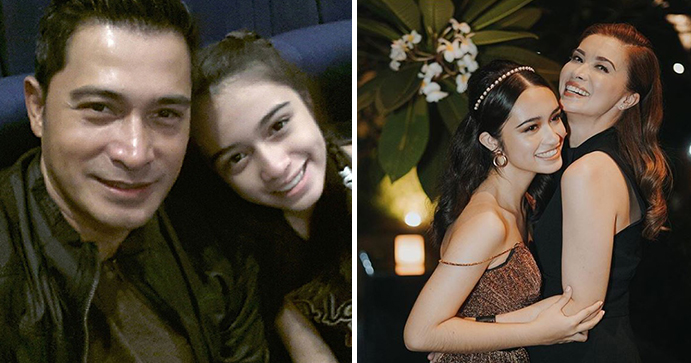 Former celebrity couple Cesar Montano and Sunshine Cruz’s eldest daughter Angelina Cruz turned 18 on September 24, and she celebrated her debut through an intimate dinner party on September 28, at Blackbird at the Nielson Tower, Makati City.


But unlike most girls her age, the young celebrity chose not to have a grand celebration as what she really wants is a very intimate gathering with her close friends and families. She also revealed in a previous interview that she was advised to go for a grand debut party by her manager, but she insisted on it to be simple. Spotted in her intimate but elegant dinner party was celebrity kids like Lorin Gutierrez, Mavy and Cassy Legaspi, and Leon Barretto.

Angelina’s celebrity mom, Sunshine, was there and helped out with the overall preparation. The 42-year-old actress was seen in several photos with her lovely daughter, who is now on her way to becoming a real lady. And of course, Angelina’s younger sisters, Samantha and Francheska, also attended this special event.

But while browsing their beautiful photos online, many netizens can’t help but notice that Angelina’s father, Cesar Montano, was nowhere to be found in any of the photos taken during her debut party.

Many reports already claimed that the former couple chose to stay away from each other totally and even rumors and speculations circulated online that the two are not on good terms.


A lot of curious netizens still asked if the father of the birthday celebrant was invited in this very important milestone of his eldest daughter. In response to their questions, the celebrity mom of three would just comment on the link of a report from the entertainment website, PUSH, where Angelina admitted in an interview that her father is invited to her debut party, but he did not come over. Based on reports, Sunshine married Cesar Montano in September 2000, but after being a couple for ten years, she decided to file an annulment case in 2014. It was only last year when the court finally granted their annulment.