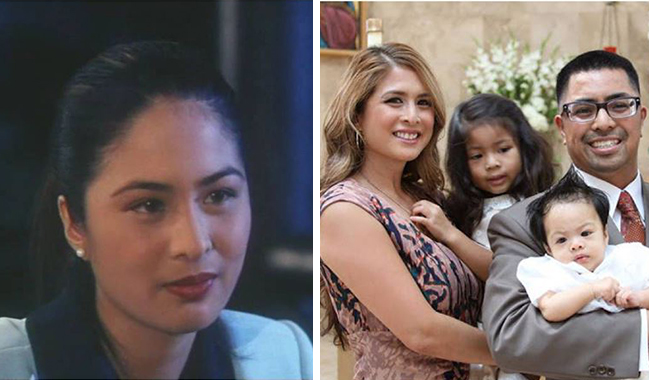 
She is a popular ‘90s Filipina actress who rose to fame in the Philippine showbiz industry for doing some daring roles and was later dubbed as the “Pantasya ng Bayan.” Unknown to many, the beautiful actress also participated in the Miss Taguig – Hollywood pageant in 1996, where she received the special award for the Miss Photogenic, but failed to bag the grand title.

Aside from her several movie projects and television shows, she also became one of the most in-demand cover girls for a popular men’s magazine in the late ’90s. However, the original “Pantasya ng Bayan” posed for her last cover in this men’s magazine in 2007. Despite her rising career and fame as an actress, Joyce has decided to leave the limelight just like those celebrities who instantly like a bubble in the spotlight, she left the showbiz industry in the mid-2000.


It was later revealed that she chose to leave to have a private life in the US. She then tied the knot with her Filipino-American boyfriend Paul Ely Egbalic in 2008, who is a soldier of the Air Force of the United States. They were blessed with three gorgeous children named Jorja Ely, 9, Jaysen Elise, 8 and her only son, Julian Elysson, who is already 5 years old. According to the report of GMA News, their child Jaysen was diagnosed to have autism in 2015. This made her and her husband an advocate of such activities that spread Autism awareness to people.

If you’re also wondering what happened to the original “Pantasya ng Bayan.” Joyce is now living a happy and contented life as a wife and doting mother to her kids in San Diego, California where she works as an office supervisor. She also said in a previous report that she has no regrets when she left her career in the Philippines to raise her own family.

In the report of the GMA News, it was in the year 2015 when their child Jaysen was diagnosed to have Autism. And because of this, they have been active in activities such as fun runs to spread Autism awareness to people. Now residing in San Diego where she works as an office supervisor, Jimenez said she had no regrets when she left her acting career to raise a family.