The days of experiencing a snapshot of the world through a small window when you fly may soon be a thing of the past as future aircraft could offer a spectacular panoramic view of the world below.


A British Technology research firm known as The Center for Process Innovation has come up with an intriguing and an innovative new aviation concept that has won them a prestigious award – windowless planes.

The Center for Process Innovation’s idea is not to ruin your views while traveling through the air but to enhance them. This would be achieved by filming the exterior environment and displaying the live, high-definition footage on interior walls throughout the cabin.


Of course, it would also be possible to display other things on the screen beside the 360-degree view of the skies. The interactive ‘digital wallpaper’ could allow travelers to personalize their environment, providing options to adjust lighting or even change the view. The technology could also be used as a multimedia device to screen in-flight entertainment. Using Organic Light Emitting Diode (OLED) technology, the thin, bendable and lightweight display screens will blend seamlessly with the fuselage and aircraft surfaces, such as setbacks, optimizing space and substantially reducing the weight of the aircraft.


Weight is a constant issue for the aerospace industry with over 80% of the mass of a fully laden aircraft comprising the actual craft and its fuel. For every 1% reduction in weight, the approximate fuel saving is 0.75%. If you save weight, you save fuel, and less fuel means less CO2 emissions into the atmosphere and significantly lower operational costs. 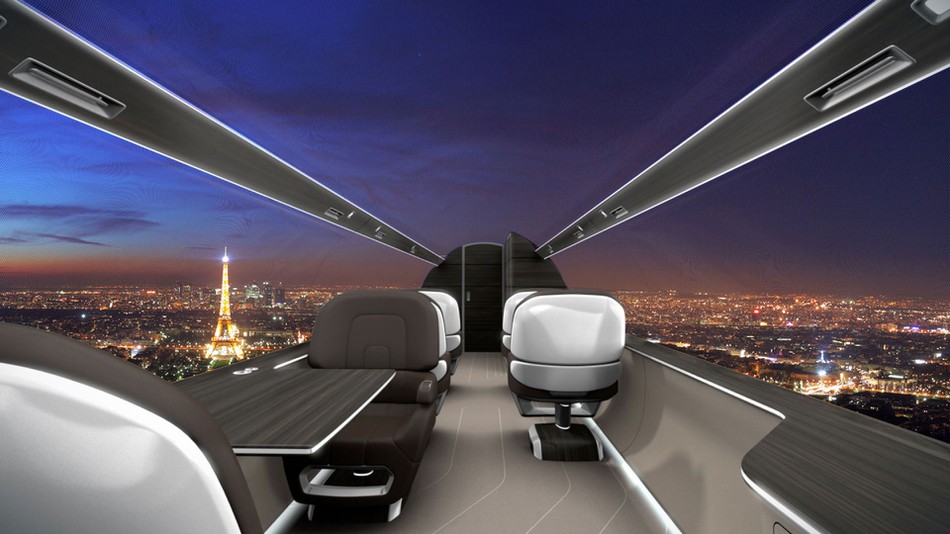 However, the futuristic idea isn’t without its drawbacks. For one, there are worries about the reliability of the windows and the eliminations of windows as exits in case of emergency.

The light pollution associated with this idea might also cause some passengers to be more than slightly annoyed. If you are claustrophobic, this idea might help until you realized you are more trapped than before without any window access.

But if you are one of those who is tired of fighting for the window seat every time you travel by plane, this future in travel technology is one for the books.

Within 10 to 15 years, these planes could hopefully be a reality.

Watch the video below: