Vic Sotto, who is also tagged as the “George Clooney of the Philippines,” has definitely been surrounded by beautiful women long before he has found his safe haven beside co-host Pauleen Luna.


But while Clooney’s appeal is easily explained, Sotto’s is perplexing. His lanky frame and prominently elongated chin don’t scream “leading man material.” Still, many of those who’ve hung out with the comedian says he’s “sexy” and that he “smolders.” Sotto’s relationship track record speaks for itself. Sometime in the early 1990s, it was revealed that Sotto and TV-host actress Coney Reyes were an item. Reyes gave up her Eat Bulaga stint at around the same time. She and Vic had a son named Vico, but eventually called it quits after some time.


A few months ago, Coney Reyes looked back on her early days as a single mom to her children L.A., Carla, and Vico. She uploaded a set of photos on her Instagram account, showing the “travel memories” of the veteran actress with her kids who were all much younger then. Judging on the throwback posts, Vico was only around 5 or 6 when he and his siblings saw snow for the very first time. Prior to this, he also had his first trip to a bird park in his family’s Singapore getaway. Coney and her then-teenager ‘bunso’ have also been to New York and China. Netizens got curious about who Vico Sotto is behind the limelight. Victor Sotto or more commonly known as Vico Sotto is currently in the public service – a Pasig City First District Councilor. He is the third son of Vic Sotto. 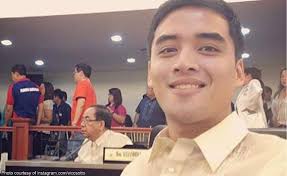 Vico has four paternal half-siblings – Danica, Oyo Boy, Paulina, and Talitha. Although they don’t share the same biological mothers, the children of Vic are visibly close to each other and share a wonderful relationship with him.

Danica and Oyo Boy are the children of Vic Sotto with his actress ex-wife Dina Bonnevie while Paulina is her daughter with Angela Luz. Talitha, the youngest among the five Sottos, is his baby daughter with his wife Pauleen.


During special occasions most especially his birthday, Vic really gathers his children on a celebration. They usually go on a family trip.

According to a report, Coney Reyes has described Vico as “God-fearing.” She expressed that her son has the “heart for the poor” and he always wants to do what is right.

Vico never had any hang-ups about having separated parents. Speaking about his parents’ romantic history, the 27-year-old city councilor said that he understood why his parents broke up more than two decades ago. Vico further said that it helps that his parents have remained friends despite their failed relationship. Coney was likewise vocal in saying that Vic has always been a good father to their son.