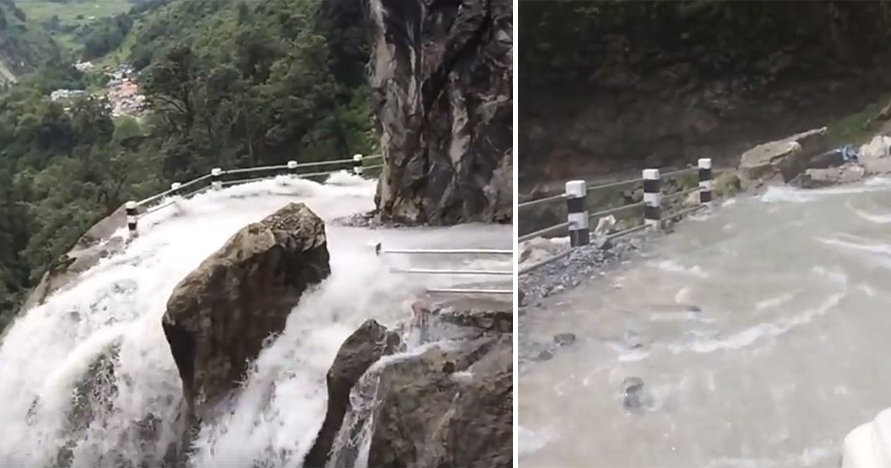 A lot of web sources list the most dangerous roads in the world, but only a few of them mention the road to Manang. The Manang Road is the name of the sharply winding and precipitous ascent in a steep and narrow zig-zag road located to the north of the Annapurna mountain range in Nepal. It’s a narrow ledge chiseled into the side of a cliff, and it takes a brave driver or passenger to ride it.


A few years back, a video of two trucks full of passengers expertly navigating along the cliff above side road engulfed in the waterfall has gone viral on YouTube.

The footage was apparently shot during the spring thaw when the waterfall overflows onto the roadway and makes it look more like a rushing river. It’s hard not to think that the passengers might well be better off traveling in a boat than a truck, with rushing water pounding down from above, swirling around the curves of the roads, and plunging into the sheer drop below. The huge waterfall storming its way through tore down the guard railings from the side of the road in several places. The driver, however, didn’t hesitate for a second and continued to drive right through the rapids.


The drive is simply terrible and really challenging because the road abounds in twists and turns with the wheels sometimes hanging above the precipice. It’s a true test of both the vehicle and the passengers’ stamina. The paved section was put in just a few years ago along with an old mule trail but is still only suitable for 4×4 vehicles since the combination of steep uphill rocky terrain and lack of oxygen is dangerous for engines.

It’s certainly breathtaking, and its adrenaline-pumping journey is definitely not for the fainthearted. It would seem that only the most skilled drivers can drive this road without breaking a sweat.