It is really a good thing to invest and grow the hard-earned money you have worked for years to make a lifetime security for yourself. Most people try to invest in real estate and make their chances of improving their life much better.


Certain celebrities such as Katrina Halili also pursued investing in real estate. She purchased 14 hectares of land in El Nido, Palawan that seems to be a clever decision on her part. The land has a small rice field and also piggery that she rents for one of the locals. She really maximized the space of her land as she also takes care of some few animals. She also built a large house with three-bedroom space on her property.

Most people often refer to the land as Katrina’s Farm because of the lushness and its never-ending view of the vegetation. It is also entrailed with a green forest and a creek which is adorned by most people. The majestic view of the house and its landscape in El Nido is really endowing feat. It is really a great escape from her toxic life in show business as it turns up to be a very beautiful place where she could enjoy her time with her daughter Katy and also the ones who are close to Katrina’s heart.


Katrina’s mom, Malou, took care of the whole structural plans and designs of the house while the actress didn’t really bother at all. The house presents a very spacious area that’s why it is easy to be comfortable with. It has a charming aesthetics that promotes a classy and vintage design from the past. The front of the house is located at the side of the hill in the middle of the property. It is a very inviting structure that really reminds a familiar outlook of vacation houses and villas in a resort. It also showcases an ideal image of country-inspired lands which are often seen on various social media platforms. The house is also lined up with a clear path that at each side is filled with lush plants. It also has some huge windows so that the view of the outside farm area could be seen perfectly from the house. The windows also give a very natural effect of the light that passes through it and also the freshness of the air. It is primarily made of high-quality wood which is preferred by Katrina’s mother.

The veranda shows a very countryside image that keeps the guests relaxed into the house. It has patterned textiles, a trellised ceiling which is very high-quality materials. It has vines that give a natural and more picturesque view. The living room is made very lightly as it has many furnishings and views to highlight. Although it is a very simple view, it is still a very classy room with its narra floors. There is also a low bench near the window which serves as a seating area. The capiz lighting piece and the artificial plants that adds a little romantic set up. The kitchen is unusual yet so attractive through cooking. Most of the cooking is done in the kitchen backyard. It takes some sufficient area that could allow the owner in store things int heir cabinet and drawers.


It also has a wooden counter which is specifically customized which adds a dramatic feel to the design. Katrina’s mother has some fascination with these artificial vines that she uses in place of curtains unavailability. In the living area, a double door leads to one of the two guest rooms in the house. The teal color design adds a feeling of tranquility. Although it has fewer furniture which is similar to other areas of the house, it also promotes good visuals of the house because of its archaic designs. Malou also added some white bed linen in which the designs are totally vintage that are handcrafted. You could also notice that the windows have no screen cover. Katrina’s mom favorably uses Katsa as curtains to prevent insects from coming inside the house. It mainly functions as a kulambo or web-like feature.

The guest bathroom, which is above the stairs are very top of the line with fixtures equipped with bidet and shower room that is parted with wood materials. The house also features a spiral staircase that leads to the second floor of the building. It is one of the ideal parts of the house as it makes a very classy-feel when climbing the stairs. The wall in the staircase also features Katrina Halili’s debut from the FHM Philippines with her fiery portrait. The second floor of the house is confided with two areas which are the master bedroom and the veranda that is adjacent to the bedroom. The veranda gives a decent view of the farm although there are no photos of it. The master bedroom is only comprised of one bed that also features a very archaic design that will make you feel an enjoyment of simple life. With its comprised high ceiling, the air will surely circulate freely across the room. 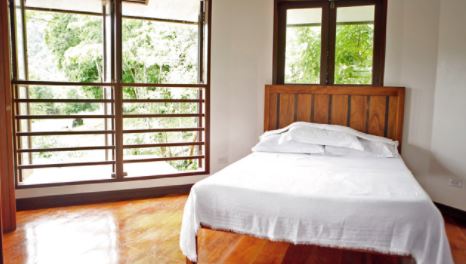 It will really make your day good by waking up on a magnificent view of the veranda which streams an array of sunlight and gives you with breezes of fresh air.


Having this one of a kind property will make you feel prosperous in life that is surely worth spending for.

The separation between the bedroom and the bathroom are also filled with artificial vines that are primarily designed by her mother. It provides a nature-loving feeling for anyone who sees it.

This area has a nippa hut which is usually a hangout place for Katrina and her friends. It looks old but with simple refinement and makeover, it will surely be a very chill and stress reliever place. What are your thoughts on this wonderful abode? Share this article!